The latest on Japan:

(Image above: today’s WSJ and IHT feature the same moving photo of a woman standing amid wreckage.)

Here are a few resources I recommend for following the Japan news online:

After three decades of spectacular growth, China passed Japan in the second quarter to become the world’s second-largest economy behind the United States, according to government figures released early Monday.

The milestone, though anticipated for some time, is the most striking evidence yet that China’s ascendance is for real and that the rest of the world will have to reckon with a new economic superpower.

Street Peeper is a new blog devoted to global street fashion. The Asian cities featured here include Jakarta, Seoul, and Tokyo, but Bangkok hasn’t yet joined the party…

Each year, farmers in the town of Inakadate in Aomori prefecture create works of crop art by growing a little purple and yellow-leafed kodaimai rice along with their local green-leafed tsugaru-roman variety. This year’s creation — a pair of grassy reproductions of famous woodblock prints from Hokusai’s 36 Views of Mount Fuji — has begun to appear (above). It will be visible until the rice is harvested in September.

I would kill for a taste of the Pepsi Ice Cucumber. Not to mention the Coolpis Kimchi Drink.

I have a story at Tripmaster Monkey today about Asia’s craziest buildings. Enjoy (and leave a comment at the bottom of the article, if you like).

Seriously. Click on the link for a bigger pic of what appears to be a pizza with sausage and cheese embedded in its crust. Can any Japanese readers out there help me with a translation?

I’m not making this up. 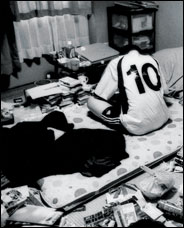 — “Shutting Themselves In,” about Japanese boys who hole up in their rooms for years at a time;