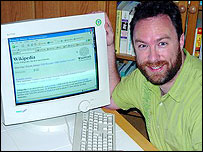 Prominent journalist John Seigenthaler described as “false and malicious” an entry on Wikipedia implicating him in the Kennedy assassinations.

When he phoned Jimmy Wales, Wikipedia’s founder, he was told there was no way of finding out who wrote the entry.

Wikipedia has since removed the entry and now requires users to register before they can create articles.