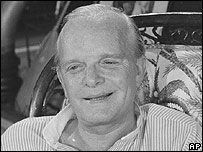 When he was all of nineteen years old, Truman Capote wrote a novel that is only now being published; he said he’d destroyed it. The current New Yorker has an excerpt from the book illustrating that Capote’s genius for stylish prose manifested itself at an early age indeed:

Broadway is a street; it is also a neighborhood, an atmosphere. From the time she was thirteen, and during all those winters at Miss Risdale’s classes, Grady had made, even if it meant skipping school, as it often did, secret and weekly expeditions into this atmosphere, the attraction at first being band shows at the Paramount, the Strand, curious movies that never played the theaters east of Fifth or in Stamford and Greenwich. Since she had turned seventeen, however, she had liked only to walk around or stand on street corners with crowds moving about her. She would stay all afternoon and sometimes until it was dark. But it was never dark there: the lights that had been running all day grew yellow at dusk, white at night, and the faces, those dream-trapped faces, revealed the most to her then. Anonymity was part of the pleasure, but while she was no longer Grady McNeil, she did not know who it was that replaced her, and the tallest fires of her excitement burned with a fuel she could not name.

“Capote,” a new biopic I mentioned earlier, opens next weekend.