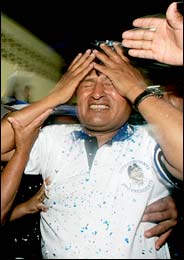 This is an historic moment for Bolivia and all of South America. The continent has elected its first-ever indigenous president, Evo Morales: coca legalization proponent, self-proclaimed “nightmare” of Washington, and pal of Hugo Chavez and Fidel Castro. And he won convincingly. Here’s a good article providing some context from the NYT.

2) the rejection of neo-liberal economic policies;

3) an example of the unintended consequences of the Bush adminstration’s hardline foreign policy. Morales might not have been elected if anti-US sentiment weren’t so high in South America these days — indeed, his campaign slogan was “‘Causachun coca, wanuchun Yanquis’ (‘Long live coca, death to the Yankees’). 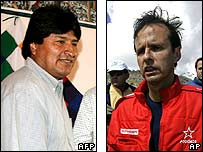 Bolivians are voting for a new president today.

I haven’t been able to find any news on how the voting has shaped up so far, but the best analysis I’ve seen is from Bolivia expert Miguel Centellas, who says Evo Morales is set to win — but may ultimately be hamstrung by a lack of support in Congress:

And an Evo presidency, facing an opposition-controlled Senate & House of Deputies, and w/ none of the prefects under his control, will be the most heavily restricted presidency in Bolivia’s democratic history.

Will this indigenous man — a former coca farmer — be the next president of Bolivia? No one knows for sure. The election is on Sunday.

According to the NYT’s Juan Forero, coca-legalization proponent and indigenous coalition leader Evo Morales just might become the next president of Bolivia.

The election of Morales in Bolivia would represent the triumph of indigenous groups over the minority white elite ruling class — as well as the rejection of what’s viewed as American imperialism and the encroachment of globalization on poor people’s lives throughout the southern Andes.

This monumental shift, should it reach fruition, would mirror the central thesis of Amy Chua’s prescient tome “World On Fire”: that the world’s so-called “market-dominant minorities” — the wealthy whites, in the case of Bolivia — become enriched by globalization while the poor majority indigenous population becomes increasingly destitute and disenfranchised. Class tensions, in this scenario, are exacerbated; violence erupts.

The ascent of Morales in Bolivia, if it happens, may signal a sea change in Andean politics. Only time will tell; could Peru and Ecuador, which also have sizeable Indian populations, be next?

Here’re some delightful photos of Mexico City wrestlers. My favorite of these Lucha Libre stars is either Super Porky (pictured), Super Raton, or Maximo — though Maximo could really use a longer skirt. (Sadly, La Liga Mexicana doesn’t feature any cholitas de Bolivia.) 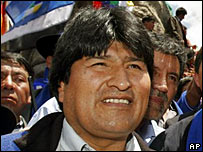 Bolivia’s general election – supposed to be taking place on 4 December – has been postponed amid a row over the reallocation of congressional seats.

The election was called earlier this year as a way of ending street protests that had led to the resignation of President Carlos Mesa in June.

But a fresh row has broken out after a court awarded more seats to the more developed eastern part of Bolivia.

The vote can still be held in December if the politicians reach a deal soon.

Here’s an interesting — if alarmist* — assessment of a potential US military buildup in Paraguay.

(*I mean, c’mon, it’s not like our government has a history of meddling in Latin American affairs or anything.)

Watching America has the translation of an article from Spain about developing ties between the US and Paraguy. Interesting passage:

This was admitted by the vice president himself, who said that Secretary Rumsfeld was worried about the situation in the zone. “… We also spoke of countries closer to us in the region; they (the Americans) are quite worried about the instability of governments like Ecuador, that is on its seventh president in nine years, or Bolivia, which remains unstable, and the same with Brazil, which at the moment is experiencing great political upheaval.

“In comparison, Paraguay is an area where one sees strong political stability, governability and institutional strength…

Thanks to a link from the excellent Global Voices Online, my post about Bolivia, Ecuador, Peru, and Foreign Policy’s Failed States Index Map has attracted interesting comments from bloggers boz and Miguel A. Buitrago.

Boz agrees that the Index was flawed; he says the evaluators “tried too hard to rank all states on some common standard, and managed to fail a common sense test.” And Miguel points out some pages on the FP site that list the criteria they used in their rankings.