The NY Times reports that, just as analysts had begun discussing the possibility of civil war, the situaion in Bolivia seems to have been resolved—for now:

Bolivia’s Congress accepted the resignation of President Carlos Mesa late on Thursday night and swore in the head of the Supreme Court as the new president, an appointment expected to defuse more than three weeks of protests that have paralyzed the nation.

The “solution”: a new head of state and new presidential elections to follow. We’ll see how that goes. Will the indigenous narco-politician Evo Morales take office, which would delight the protesters? (If you think Venezuela’s Hugo Chavez is scary, check out Morales’s resume.)

Here’s the problem with the current prez, Eduardo Rodríguez. Look at the color of his skin. The guy’s white, he wears Armani specs, and he sports a power tie straight outta the Brooks Brothers Summer catalog: 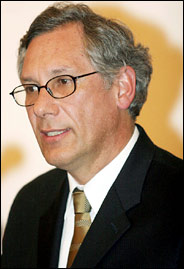 Now take a gander at your average protesters. Notice the color of their skin. Notice the way they dress:

That, kind readers, is what this conflagration is all about: Race. And Money. The white, European-descended, wealthy Bolivian oligarchs who run the country vs. the impoverished Indian majority. No way around that fact.

Next Andean country to dissolve into chaos: Peru. Seriously.