I’m familiar with neither this author nor this publication, but here’s a thought-provoking article about rumored US military efforts to build a base in Paraguay.

If it’s true, it’d make sense strategically — the base would be close to both ever-unstable Bolivia and the troublesome triple frontier region, which is home to South American al-Qaeda-linked groups. 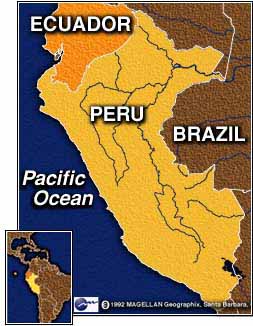 My gripe: Ecuador is listed as “borderline,” while neighboring Peru is described as “in danger.”

Is Peru really in worse shape than Ecuador, which has seen three presidents deposed since 1997? While Peruvian president Alejandro Toledo’s approval ratings have been subterranean for a while (only about 7-10% of Peruvians currently approve of his performance), the government appears more stable than its northern neighbor.

The country-by-country data provides some insight: Peru receives a poorer score for “Security Apparatus.” I suppose that’s a reference to the Peruvian state’s ongoing struggle to deal with those pesky Maoist rebels, the Shining Path. The guerillas have been quiet of late, though, so I find this explanation surprising.

UPDATE: I just took another glance at the map, and I wanna know this: who’s doing the fact-checking over at Foreign Policy? Morgan Spurlock? Amazingly, Bolivia’s not even included on the list.

Bolivia’s president — as you’ll recall reading about here and elsewhere — stepped down a few months ago after a massive indigenous uprising. Bolivia is truly teeting on the edge of chaos; Peru and Ecuador are comparatively far from collapse.

I find this more than a little disturbing. For a variety of reasons.

Ostracising Myanmar has not helped its people. It is time to explore the possibility of a deal

Ashtrays have been disappearing in cars like fins on Cadillacs, and so could smoking while driving in New Jersey, under a measure introduced in the Legislature.

Although the measure faces long odds, it still has smokers incensed and arguing it’s a Big Brother intrusion that threatens to take away one of the few places they can enjoy their habit.