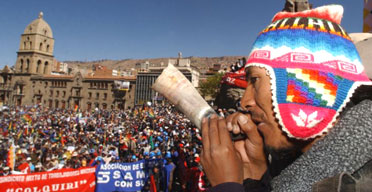 The Bolivian president, Carlos Mesa, yesterday submitted his resignation in an attempt to bring weeks of crippling protests over the management of the country’s natural resources to an end.

Mr Mesa – whose 19 months in office have been beset with political crises – had struggled to stay in power in the face of demands for greater state control of Latin America’s second largest natural gas reserves. He also faced calls for more independence from some of the country’s wealthier provinces.

Mesa’s offered to quit before, but it looks like this time he means business.

Mesa tried to step down three months ago over protests against his hydrocarbons policy, but Congress rejected his resignation, giving Mesa crucial support after he had said the country was becoming ungovernable. Mesa was counting on foreign investment to tap Bolivia’s 28.7 trillion cubic feet of natural gas, Latin America’s second-largest reserves after Venezuela, to drive economic growth and create jobs.

This time, however, analysts said lawmakers frustrated over Mesa’s inability to persuade leftist popular forces to accept a law to increase gas taxes would probably accept his resignation and hope a transitional leader would be able to reconcile the country’s polarized political forces.

”Is this a serious resignation? It looks like it is, though it’s not irrevocable,” said Eduardo Gamarra, a Bolivia specialist at Florida International University interviewed by telephone last night.

The departure of Mesa, an independent politician who has been assailed by all sides, would leave a void, Gamarra said, that ”in a worst-case scenario, could lead to civil war, laced with all kinds of serious racial overtones. Quite possibly, in a best case, we’re looking at six months of serious uncertainty and political turmoil. The situation is very severe.” It was not clear when lawmakers would meet to accept or reject his resignation. If he is permitted to step down, he would be replaced by the president of the Senate.