In almost every part of the country, you can find a conceptually and architecturally ambitious hotel: In mountainous Ratanakiri, there’s the Terres Rouges Lodge, a former provincial governor’s lakeside residence that has, Time Asia said last July, “the best bar in the middle of nowhere.” On the Sanker River in Battambang, Cambodia’s second-largest city, there’s La Villa, a 1930 house that in October opened as a six-room hotel filled with Art Deco antiques. And sometime this summer, you should be able to head south to Kep and stay at La Villa de Monsieur Thomas, a 1908 oceanfront mansion that’s being transformed into a French restaurant ringed with bungalows.

And then there is Angkor Wat. Foreign visitors are flooding in – 690,987 paid entrance fees last year, up from 451,046 in 2004. And while there are no official figures as to how much each spends in Siem Reap, the town’s dizzying array of luxury hotels – at least 10 by my count, ranging from the Raffles Grand Hotel d’Angkor to quirky boutiques like Hôtel de la Paix – testifies to the emergence of a new generation of high-end travelers, who not only demand round-the-clock Khmer massage but are also willing to pay $400 a day to hire a BMW L7 or $1,375 an hour for a helicopter tour.

Cambodia is not alone in its luxury revolution. Since the mid-1990’s, the former French colonies of Southeast Asia have made enormous leaps in catering to tourists who prefer plunge pools to bucket showers. From the forests of Laos to the beaches of Vietnam to the ruins of Cambodia, you can find well-conceived, well-outfitted, well-run hotels that will sleep you in style for hundreds of dollars a night. Today’s Washington Post travel section has a great article on motorbiking in Northern Vietnam — and doing so on fabled Minsk bikes, no less.

Dustin Roasa describes the two-week journey he took with his girlfriend; he does an excellent job of conveying both the cultural and historical details of the trip along with the unique sensations of this incredible part of the world.

Interestingly, Jill and I took nearly the same route last year; my buddy Chris and I also undertook a similar sojourn back in 2002.

(Chris has recently unearthed some pics from our trip, by the way, that are worth a look. I especially like this shot of a precarious “bridge” we navigated. I’m proud to say that I made it across the thing during what was the first full day I’d driven a motorcycle in my life; I was too young and dumb to know any better, I suppose…) 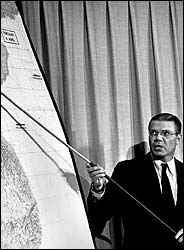 The National Security Agency has kept secret since 2001 a finding by an agency historian that during the Tonkin Gulf episode, which helped precipitate the Vietnam War, N.S.A. officers deliberately distorted critical intelligence to cover up their mistakes, two people familiar with the historian’s work say. WaPo: “Vietnam Buffs Bring Jungle to Va.: Reenactors Evoke a War Many Would Rather Forget”

I consider myself to be way ahead of the curve, so I shall be staging an Iraq war re-enactment this weekend in the Arizona desert. (I’ve got Syria, Iran, and North Korea re-enactments tentatively planned for next summer contingent upon current events.)

Erik at the travel blog Gadling has selected one of my Vietnam pics, below, as his Photo of the Day. It’s one of my favorite images from what was a fabulous trip that Jill and I took there last March; in Erik’s words, the image captures “the sun simmering in a saffron haze.”